The Atlanta Braves tomahawk chop and name controversy involves the name and tomahawk chop tradition by the Atlanta Braves, an American Major League Baseball (MLB) franchise. Native Americans have been questioning the Braves mascot choices since the 1970s. Native American objections to the tomahawk chop received much attention during the 1990s and has continued through 2020. The Atlanta Braves and their fans continue overwhelmingly support the team name and chop tradition.
The tomahawk chop was adopted by fans of the Atlanta Braves in 1991. Carolyn King, the Braves organist, had played the "tomahawk song" during most at bats for a few seasons, but it finally caught on with Braves fans when the team started winning. The usage of foam tomahawks led to criticism from Native American groups that it was "demeaning" to them and called for them to be banned. In response, the Braves' public relations director said that it was "a proud expression of unification and family". King who did not understand the political ramifications, approached one of the Native American chiefs who were protesting. The chief told her that leaving her job as an organist would not change anything and that if she left "they'll find someone else to play."

" The heads of the Muscogee (Creek) Nation and Cherokee Nation both condemned the chop and chant.

During the off-season, the Braves met with the National Congress of American Indians to start discussing a path forward. 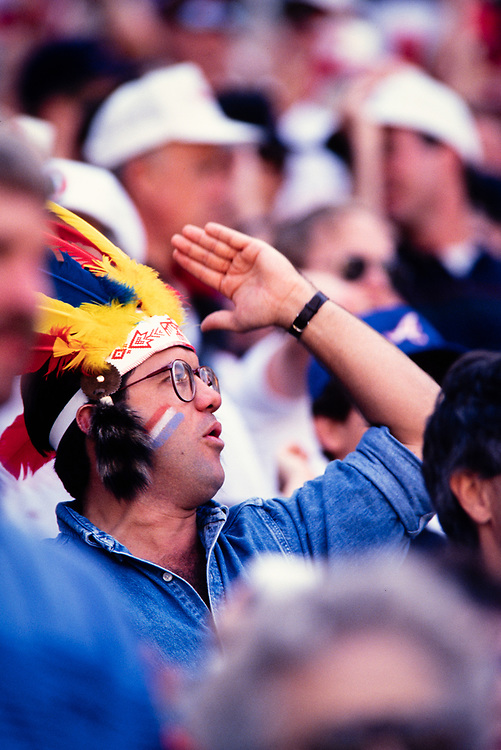